Listen & Buy
Ever wonder what would happen if Depeche Mode and Erasure got together to do an EBM project? You'd have Monofader. Featuring Sebastian Komor from Icon of Coil, and Richard Bjorklund of Spektralized, Monofader combines the best of synthpop and EBM.

One fateful night in 2001, the duo decided to play around with some new ideas in the Icon of Coil studio. After a few hours of caffeinated collaboration, the two created a track which was to become the song "Solid Ground," which eventually made its way onto Norwegian Tatra Record's 2002 compilation Serial Killer Electronics, under their then band name Off:Tribe.

After that, the two produced more tracks together and released a 6-track demo tape several months later. They sent it to several labels, radio stations and DJs and received excellent feedback from listeners. Despite this, the project had to be put on hold while Komor and Bjorklund went on tours and were otherwise busy with their previous acts. In December 2003, while he was in Germany with Spektralized, Bjorklund gave a copy of their demo to Infacted Recordings and ended up getting signed to the label for Europe, and to Metropolis Records for North America. The duo immediately began work on their first album, Frost.

Frost is an incredible mix of modern dance beats, melancholic soulful vocals, light hearted melodies and smooth programming. As the first results of this surprisingly fresh and strong cooperation of one of Norway's most talented producers, and vocalists, Monofader's Frost will blanket the ground in the electronic music scene and leave no-one untouched. 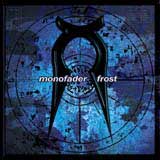