Suicidal Romance is an Estonian based band that has been creating electronic music since 2006. When they released the song “Cold Kiss” just for pure fun, it garnered so much positive feedback that it was decided to make Suicidal Romance a serious project. Viktoria Seimar joined the band as the female vocalist in August 2006 at the same time as Maarja Korstnik. Shortly afterwards, their only demo CD was released and one month later Suicidal Romance was signed to Infacted Recordings. Their first ever live show followed one month later when they opened for Spetsnaz and then the band retreated into the studio to record their debut.

In 2007 Suicidal Romance released their first album, Love Beyond Reach, which contained eleven tracks as well as remixes from Blutengel and Lost Area. To promote the release, the band toured Germany and the Netherlands extensively and made appearances at the Summer Darkness and DarkStorm festivals.

That following year, in 2008, Suicidal Romance played one of the biggest festivals in Europe, Wave Gothik Treffen and released a follow-up EP, A Kiss To Resist. However just as the band was rising in popularity, a problem arose. At the end of 2008 Dmitry i. began having trouble with his health from drugs and alcohol overuse that lead to months of having to be prescribed anti-depressants.

With the turmoil subsiding, somewhere in the middle of 2009 Dmitry i. began to put the final touches to the band’s next opus.

Now, for 2010, Suicidal Romance joins the Metropolis Records family for the North American release of Shattered Heart Reflections. It is said that dark times can fuel the creative spirit, and Shattered Heart Reflections proves that to be true. This album sees Suicidal Romance creating a whole new direction for the band, playing more with modern sounds, leaving its gothic style and Dmitry’s depression behind. 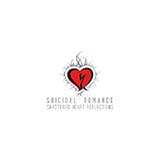