Rhea's Obsession is the bewitching collaboration between two musicians who come from two very different creative backgrounds. Rhea's Obsession is a Canadian act that works at bringing the extremes of music together in one band. On one end is Sue Hutton, who has an extensive background in Indo-Celtic-Bulgarian style vocals and world percussion; on the other is Jim Field, who comes from a background of hard core and experimental music. Together they produce a surprisingly harmonious and carefully crafted style of song writing that has entranced listeners throughout North America.

Sue and Jim first came together in 1995 to score a soundtrack for an experimental dance film called Tabulae Anatomacae Sex. Drawing their name from the Greek goddess Rhea, who is herself the daughter of the extremes of the Sun and the Earth, Sue and Jim quickly found that their differences were condusive to creating a unique new style of music. Tabulae Anatomacae Sex featured the distorted drones, esoteric vocals, and tribal percussion that the band is now identified with. Following this, Rhea's Obsession was chosen to score music for Canada's Much Music / Bravo TV, who had purchased Tabulae Anatomacae Sex for broadcast. Following these sucesses, Jim and Sue decided to record a full length record, that eventually became Initiation. This disc was released in 1996 to critical acclaim, rising quickly through the Candian alternative, new age, experimental, and goth-industrial charts. On the strength of this record, the television series La Femme Nikita licensed two tracks for their worldwide syndicated show.

Following the attention Rhea's Obsession garnered from their soundtrack work, the Initation release, and live touring in support of Initiation, the duo attracted the attention of Metropolis Records. Their first release on Metropolis Records, Between Earth and Sky, features further maturation of the myriad elements that make this act so special. Like the works of Sarah McLaughlin or Dead Can Dance, Rhea's Obsession writes with a mystical flair that can capture the imagination of the listener with its deep spirituality. The eleven tracks that comprise this disc, from the catchy songwriting on Spiritual Fear and Mortal Ground to the of hypnotic finale of Breakthrough make Between Earth and Sky one of the best dark wave discs of 2000.

Due to the interest that arose in the band from the Between Earth and Sky release, Metropolis has now re-issued Initiation with bonus tracks and brand new artwork. Re:Initiation features a blend of esoterical vocals, distorted drones, tribal percussion, and various world culture instruments to carry the listener on a spiritual journey into bliss. 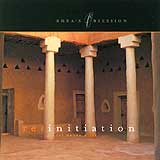 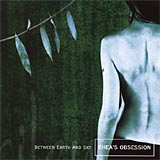 Rhea's Obsession · Between Earth and Sky