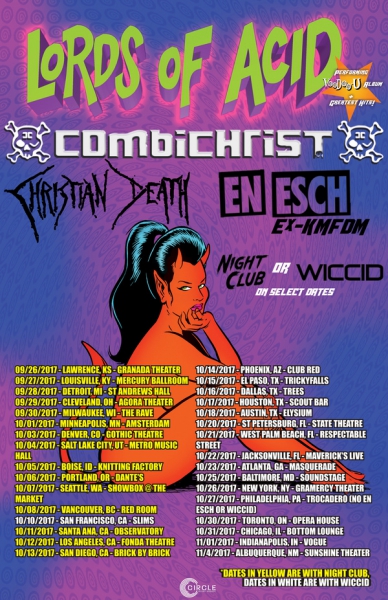 May 31, 2017, Brussels, Belgium – Lords of Acid, the legendary Belgian dance-industrial hybrid fronted by Praga Khan, return to North America this fall for the outfit’s first tour of the continent in six years.

“2017 has been an exciting year for Lords of Acid. We are happy to be finally re-releasing our out of print classic albums LUST, Voodoo-U, Our Little Secret, and Farstucker for our fans,” said Khan of the Metropolis Records' reissues. “I think we have an amazing tour planned. It will be a great experience for our fans to see Voodoo-U performed in its entirety along with our other classic hits. We’re also very happy to bring such a talented group of bands new and old out with us.”

The 5-week tour kicks off on Sept. 26 at the Granada Theater in Lawrence, Kan.  Openers for the trek include Combichrist, Christian Death, En Esch (ex-KMFDM) and Night Club or Wiccid on select dates. VIP packages are available this Wednesday at 10 am Pacific time via Soundrink (lordsofacid.soundrink.com), with general admission tickets available this Friday at 10 am Pacific time.

November 1  Indianapolis, IN  The Vogue

Founded by Khan in the late ‘80s, Lords of Acid garnered a rabid international fanbase who continue to celebrate the outfit’s unique mix of electronic and industrial music.