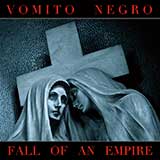 Fall Of An Empire

Vomito Negro was formed by Gin Devo in 1982, and over the years this EBM pioneer established a name as an uncompromising aural architect, combining power with emotion, EBM with vision.

Vomito Negro is latin (portuguese/spanish) for "black vomit", the last stage of the disease yellow fever, when the patient throws up his putrefied intestines and ultimately dies. Macabre? One might consider Vomito Negro 's interest in the darker side of the human condition as unhealthy, but in fact it is fueled by a desire to cope with and to understand life (and consequently death), as we know it.

Vomito Negro handles these topics with grim sarcasm and/or penetrating personal involvement; under the surface however, they give way to a message of redemption, passion and purification. In times where every band that puts together tracks using a standard sound module and vocal distortion in their bedroom is hyped as the new hope in the "Harsh Electro" or "Dark Electro" genre, Fall Of An Empire proves that Vomito Negro still a trademark name for a club compatible trip to hell that is bound to stir up, unsettle and electrify. 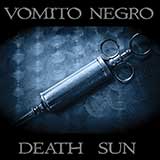