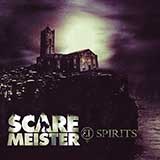 "Of my entire career to date, this is my best work without a doubt"- Ken Marshall

Comprised of cEvin Key, Ken 'hiwatt' Marshall & Traz Damji, Scaremeister is a dark and deeply haunting approach to the horror/thriller film genre. Consisting of 31 unique ï¿½mini-scoresï¿½ of original sound design, the work is equally compelling as individual tracks or as an album. 31 Spirits is guaranteed to disturb.

ï¿½Scaremeister is a project and partnership with two of my best friends and long-term collaborators, cEvin Key and Traz Damji. We made a deal with Groove Addicts in 2007 (now Non-Stop Music/Warner Chappell), to compose a 'volume' of film trailer cues for horror movies. The following year we produced 31 cues that were very well received by the film community, being placed in many film trailers, including: Inglorious Bastards, Transformers II, My Bloody Valentine, Book of Eli and Halloween 2 (just to name a few). With the ongoing success of Volume One within the film industry, we decided to release these works to the public so they can be heard outside theaters! We sincerely hope you enjoy Scaremeister's debut album '31 Spirits'! -Ken 'hiwatt' Marshall